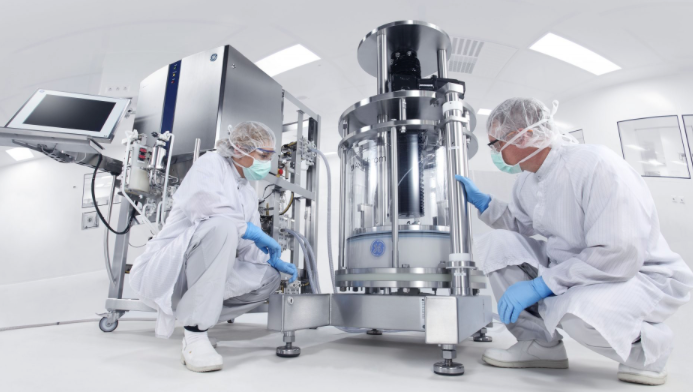 A variety of purification processes are used across many industries to produce numerous products used for daily consumption. For instance, a typical glass of water is processed through many purification steps including sequential filtration, adsorption, chemical treatment, ion exchange chromatography, reverse osmosis, distillation, UV light, and ozone treatment. The exact methods used will vary depending on the quality of water being produced, and the corresponding degree of purity desired. Each type of purification unit operation is able to remove/reduce contaminants in the source water stream, and does so by exploiting different chemical/physical properties between the desired product and contaminating components in the starting material (raw feedstream).

Of many of the purification methods used in processing industries, chromatography is particularly powerful, and is widely used in the production of pharmaceuticals. Chromatography has wide-ranging utility, flexibility across application, and especially the degree to which it can produce compounds of very high purity for human consumption.

While initially used in Russian scientific projects for plant pigment separation, this purification method designated “Chromatography”, quickly became recognized as a valuable chemical technique for many pharmaceutical purposes. A variety of different chromatographic techniques are used, each designed to provide differential separation conditions between the desired product and contaminants present in the source material. Source materials which contain the desired product may come from biological origin (eg: blood plasma, tissue organs) or expression systems like cell culture or fermentation, each of which will contain thousands of contaminating substances in addition to the desired product.

While the details of the methods vary considerably, a large percentage of chromatography used in pharmaceutical manufacturing consists of a column configuration where a liquid stream containing the product, referred to as the “feedstream”, is passed through a stationary material (resin). This stationary material can attract and retain either the product or unwanted contaminants depending on the materials and conditions employed. Retaining the product is known as bind and elute chromatography while retaining contaminants is known as “flowthrough” chromatography. Bind and elute chromatography will be used as an example for further discussion.

The stationary material is typically supplied for use as a mechanical substrate, often a resin, which is covalently linked with an active material, or a “ligand”. Once the stationary material is packed inside the column, and the feedstream is pumped through the, the ligand attracts and retains the sought-after product contained within the feedstream. The attraction between ligand and product varies between methods, but may depend upon anionic/cationic, hydrophobic or affinity bonding.

The subsequent steps include an “elution”, which flows a buffer or solvent through the column and gradually causes the release of the product into the effluent stream. The addition of buffers of varying pH, ionic strength or related conditions eliminates the attraction between ligand and product, thus releasing (eluting) the product through the column.  Measurement techniques such as ultraviolet, conductivity and/or pH are used to monitor the liquid effluent stream to determine the presence and purity of product to determine timing of effluent collection during the elution phase. Often, a gradient of increasing buffer concentration is used modulate the rate of release of retained material.

Ligand affinity chromatography separation is based on unique interaction between the target product and a ligand, which is coupled covalently to a resin. It is a simple, rapid, selective, and efficient purification procedure of proteins providing tens of thousands fold purification in one step. (1)

The leverage that a purification factor of ten thousand-fold provides, makes the extra effort of chromatography (and considerable costs) worthwhile.

The skid contains routing valves, pumps, instruments, controller electronics and an industrial PC, which directs automation functions. The local operator station operates the skid and column via the ÄKTA Unicorn software. The Unicorn software runs under a Windows OS, so network integration allows remote users the ability to see and operate the application, as well as allowing remote archiving of run logs and logging of historical data.

The software contains pre-programmed sequencing action and monitoring instructions, which is connected via Ethernet to the skid controller unit (CU-960). The controller has Profibus-SP and UniNet-1 links for communication with the instrumentation components. Measurement devices include UV, pH, conductivity, pressures, liquid flows, temperatures, air sensor and bubble trap level. Control devices include pump motors and valves connected via an AS-i bus gateway. In some configurations, a temperature control system is also integrated.

While G.E. Healthcare ÄKTA Skids integrated with Unicorn software are not the only packaged chromatography solution on the market, it is one that continues to enjoy considerable popularity.  There are some instances where end users have developed their own solutions, however the level of complexity and ROI is unlikely to provide added benefit, especially considering the development time, delayed start-up, lost production and extent of validation efforts required.

To highlight features of the Unicorn software:

Integration of a DCS system with the Unicorn System

In addition to the UNICORN based automatic operations, there are frequently concurrent operator interactions or interventions needed in the performance of a Chromatography process run.  Traditionally, these non-automatic additional actions are performed under the direction of an SOP document and recorded on batch record forms, signed and dated in ink.

Instead, UNICORN software can be integrated into a Distributed Control System (DCS) such as a DeltaV system, as shown in the figure below.  Running a DCS driven batch recipe in synchronization with the UNICORN method execution allows for recipe driven, concise operator messaging. This provides greater guidance, and tracks verification of task completion, ensuring compliance with SOP requirements.

The result is that the need for manually entering and signing batch run data for GMP documentation is eliminated, as it is instead administered and recorded by the DeltaV system.  The batch history log now captures these verifications in the electronic record with the batch run data and subsequently the batch report.

When integrating UNICORN software with a DCS:

Each Chromatography System is comprised of a Windows workstation, running the UNICORN control software, interfaced via Ethernet to a CU-960 Control Unit for integration to the UNICORN Network (when multiple AKTA units are integrated).

The detailed system architecture is depicted in the diagram below.  The typical unit architecture includes an individual column and its skid under the control of the CU-960 from which communication emanates over Ethernet, Profibus-DP and UniNet-1. Additionally, valve control is managed over AS-I bus, which is converted through a gateway device connected to the Profibus-DP leg.

The DeltaV system accesses the UNICORN skid data via Ethernet based OPC method, which is convenient as variables are referenced by path and variable name, not channel specification.

The G.E. Healthcare ÄKTA Columns’ valving is controlled by the Unicorn software in conjunction with the system’s instrumentation, all of which is contained in the skid.  The skid enclosure contains the system computer and communications infrastructure, by which it controls the instruments.

Integration of a production chromatography system in a plant’s overall automation architecture is more than just having network access, although that is important to provide access to a central server for archiving and license verification.  There is also much to be gained to allow systems integration for data exchange with the rest of the plant automation systems, in addition to historian access to real time data, batch system recipe synchronization of steps, operator instructions, SOPs and sign-off on completion of manual operations based on transition conditions.

In addition, the data flow from and to an MES system allows for higher-level functions, notably yield calculations. The improved visibility is beneficial to plant floor operations and supervision personnel to see statuses on the same screen as other production data, for engineering personnel for optimization and troubleshooting, and for production management to monitor operations.